Nick Willhite was a left-handed pitcher who spent parts of five seasons in the Major Leagues, contributing in a small way to the Dodgers reaching the World Series in both 1963 and 1965.  Willhite didn't pitch in either Series, but he did earn a World Series ring in 1963.  His lifelong battle with addiction derailed his professional baseball career and although he was once considered a rising star, Willhite appeared in only 58 games between 1963 and 1967 with the Dodgers, Senators, Angels and Mets.  He had a career record of 6-12 with a 4.55 ERA with 3 complete games.

Willhite later served as a pitching coach at Brigham Young University and briefly as a minor league pitching instructor in both the Brewers and Yankees organizations.  With the help of the Baseball Assistance Team (B.A.T.), Willhite was able to conquer his addiction in later life and would go on to become an addictions counselor himself.

Building the Set
August 21, 2020 from Charleston, SC - Card #158
In my largest (by volume) purchase to date, I spent an enjoyable hour or so in mid-August browsing the eBay store of seller mantlerulz and clicking Add to Cart on 30 different cards.  We had previously added 29 cards to our set back in February from the Philly Show.  The 30 cards, all commons, cost me $52 total (before shipping and taxes) with the cards ranging in prices from $1 to $6.  I love this haul and I found the seller's store by accident when I was browsing eBay in an attempt to add a few more cheap cards from the set's first series.  With this purchase, we've now passed the quarter mark for completion of the set.  We still have a long way to go, and quite a few pricey cards to add, but any day I can add 30 commons in excellent shape and at very low prices is a great day.  This Willhite card was $3, inexplicably one of the more expensive cards purchased in this lot.

The Card / Senators Team Set
Willhite appears on four Topps flagship baseball cards, with two Dodgers cards, this Senators card and an Angels card.  On every card he's wearing a Dodgers uniform.  The back of the card highlights the complete game shutout, the only shutout of his career, that he threw during his big league debut on June 16, 1963.  Facing the Cubs, Willhite allowed five hits and a walk while striking out six.  In the ninth, he retired Billy Williams (#220), Ron Santo (#110) and Ernie Banks (#510) in succession to preserve his gem.

1965 Season
The Dodgers sold Willhite to the Senators on October 15, 1964, on a conditional basis, as noted by his SABR biography.  In an arrangement that most likely wouldn't fly today, the Dodgers and Senators had a "pipeline" between the two teams facilitated by the fact that long-time Dodger Gil Hodges (#99) was now managing in Washington.  Willhite struggled with arm and back injuries throughout spring training and made only five relief appearances with the Senators before he was sold back to the Dodgers.

14 - Willhite non-parallel baseball cards in the Beckett online database as of 9/15/20. 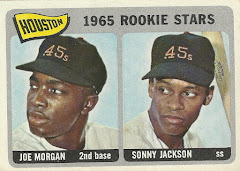