Originally signed by the Indians, Dave Vineyard spent one season in the Cleveland system before the Orioles drafted him away.  That began a seven-year stint in the Baltimore system, with Vineyard spending most his time pitching for the Triple-A Rochester Red Wings.  He started the 1964 season with an impressive 10-4 record and a 2.65 ERA for the Red Wings over 17 starts, earning his promotion to the Orioles that July.  Inserted into the team's rotation along with Dave McNally (#249), Steve Barber (#113), Robin Roberts (#15) and Milt Pappas (#270), Vineyard made six starts and an occasional relief appearance, ultimately pitching in 19 games.  His best outing came on July 24th against the Senators when he pitched his only complete game in the majors, allowing two hits and striking out seven.  He went 2-5 with a 4.17 ERA over 54 innings pitched with the Orioles, but in 1965 he was limited to only seven games with Rochester.  Vineyard retired as a player after a final season with the Toronto Maple Leafs, then the Red Sox' top farm team, in 1967. 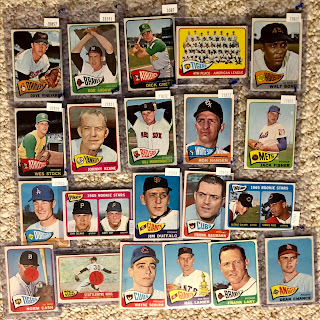 Building the Set
May 13, 2021 from Marco Island, FL - Card #261
After adding a number of star cards in April, I decided I should focus on a group of commons for our set in May.  I set out specifically to add reasonably priced cards from the set's second series and I found a few eBay sellers running specials on recent set breaks.  In total, I added 23 cards over three-day period with this Vineyard card coming from Super Bowl Auctions located in Marco Island, Florida for $2.75.  As of this writing, and after adding a few star cards late in May, I'm one elusive card away from having a complete second series.

The Card / Orioles Team Set
If you're a Dave Vineyard super collector, it won't be difficult to track down every one of his baseball card appearances, starting with this card.  Along with this card (his rookie card), there's his O-Pee-Chee card from 1965, a few oddballs (a few Orioles postcards, 1965 Jay Publishing and 1991 Crown/Coca-Cola Orioles) and a reprint of this card which Vineyard signed as part of the 2014 Topps Heritage Real One Autographs insert set.  The back of the card references his acquisition from he Indians and incorrectly predicts he'd see "lots of duty in '65 with the Orioles."
I spent a little bit of time trying to find more information on the accident Vineyard suffered in the winter of 1962, but didn't come up with anything.
1965 Season
Perhaps an injury shortened Vineyard's season?  He made only seven appearances with the Red Wings, going 0-4 with a 5.40 ERA over 25 innings pitched.
Other Notable Baseball Cards
First Mainstream Card:  1965 Topps #169
Topps Flagship Set Appearances (1):  1965
Most Recent Mainstream Card:  2014 Topps Heritage Real One Autographs #ROA-DV

8 - Vineyard non-parallel baseball cards in the Beckett online database as of 5/22/21.