Beginning in 1956 and going all the way through to 1981, with a one year absence in 1969, Topps included team cards in its flagship sets.

Building the Set
May 13, 2021 from Marco Island, FL - Card #264
After adding a number of star cards in April, I decided I should focus on a group of commons for our set in May.  I set out specifically to add reasonably priced cards from the set's second series and I found a few eBay sellers running specials on recent set breaks.  In total, I added 23 cards over three-day period with this Tigers team card coming from Super Bowl Auctions located in Marco Island, Florida for $10.  It was one of the three non-common cards I added in this mini-haul, and the third most expensive.  As of this writing, and after adding a few star cards late in May, I'm one elusive card away from having a complete second series. 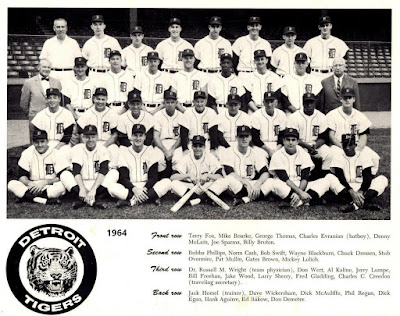 The Card / Tigers Team Set
Kudos to Topps for using a recent team photo for this card, and my internet research shows this is a photo actually taken during the 1964 season.  Equally impressive is that Topps only used this team photo once, forsaking their usual practice of using the same photo for multiple years in a  row.  Since only pitchers with decisions in 1964 are listed on the back, Dick Egan, who appeared in 23 games but went 0-0, is omitted.


1965 Season
Manager Chuck Dressen (#538) suffered a heart attack during spring training and coach Bob Swift managed the club through its first 42 games.  Dressen returned at the end of May and guided the Tigers to a fourth place finish, with the club going 65-55 under his watch.  Overall, the team went 89-73 in a fairly forgettable season, although they would find World Series glory three seasons later in 1968.
First baseman Norm Cash (#153) was the team's MVP, batting .266 with a team-leading 30 home runs and 83 RBIs.  Left fielder Willie Horton (#206) led the team with 104 RBIs and center fielder Al Kaline (#130) had another productive season, batting .281 with 18 home runs and 72 RBIs.  The pitching was mediocre, with Denny McClain (#236) leading the staff with 16 wins and Mickey Lolich (#335) right behind him with 15 wins.  Terry Fox (#576) served as the team's closer and he recorded 10 saves.

Update Cards
For each team card featured, I'll be building a checklist of cards that could have been included in a 1965 Topps update set.  The Tigers are extremely well-represented in the 1965 Topps set, and it was harder to build an update checklist for them than for most other teams.  I'm trying to come up with six potential cards for each team, and for the Tigers I only came up with five:
Sources
Baseball Reference
Previous Card:  #172 Jim Piersall - Los Angels Angels