Mel Nelson was a left-handed relief pitcher who appeared in parts of six seasons with the Cardinals, Angels and Twins.  He set a career high in appearances with 36 for the 1963 Angels, and two years later contributed to the 1965 pennant-winning Twins.  His best season however came with the eventual National League Champion Cardinals in 1968.  In 18 games, including four starts, Nelson went 2-1 with a 2.91 ERA over 52 2/3 innings pitched.  He pitched a scoreless inning in the 1968 World Series in a mop-up role in Game 6, won by the Tigers, 13-1.  In 93 career games, Nelson was 4-10 with a 4.40 ERA and five saves.
After his playing days, Nelson was a long-time scout between 1973 and 2005 with the Indians, Dodgers, White Sox, Athletics, Cardinals, Rockies, Yankees and Astros. 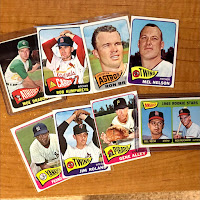 Building the Set
April 2, 2021 from Manchester, MO - Card #245
It's a strange time.  Spring has arrived, we finally attended a Phillies game in person and it seems as if with the arrival of the vaccine the pandemic could soon be behind us.  But I still find myself anxious, occasionally having trouble sleeping at night, and I know many of my friends and family feel the same way.  I went the entire month of March without adding to our 1965 Topps set, and as the month came to a close I decided to start off April with the purchase of a group of commons.  In search specifically for series two cards, I veered into the higher series when I found sellers on eBay auctioning off batches of cards from recent set breaks.  Over the course of a few days, I ended up winning 16 cards for $48 for an average of $3 per card.
This Nelson card came from eBay seller ace64cards from Manchester, Missouri for a winning bid of $3.25.  With the weather getting warmer, having enjoyed a beer at a few Phillies games and 16 new cards in our collection, the month is starting off on the right foot.

The Card / Twins Team Set
I really didn't plan it this way, but Nelson shared a floating head Rookie Stars card in the 1963 Topps set with Jim Roland (#171), and I just wrote about Roland's 1965 Topps card in my previous post.  What are the chances I'd purchase both the Nelson and Roland cards together?  For his 1965 Topps card, Nelson is shown in an Angels jersey as the Twins had purchased him from Los Angeles on May 25, 1964.  On the back, his .296 average while an outfielder for the Class C Fresno Cardinals in 1955 is highlighted.

1965 Season
Nelson was with the Twins for the entire season, appearing in 28 games and going 0-4 with a 4.12 ERA over 54 2/3 innings pitched.  He made three starts for the club.  As a member of the Twins' first pennant-winning team, he got to witness the greatness of future Hall of Famer Harmon Killebrew (#400) up close.  Nelson later told his SABR biographer that Killebrew "represented nothing but the best," and it "was fun to have Harmon as a teammate."  Nelson also recalls his joy at reuniting with some of his teammates in 2005 during the 40th anniversary celebration of the team.

17 - Nelson non-parallel baseball cards in the Beckett online database as of 4/12/21.